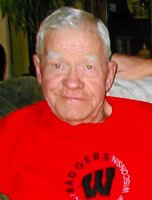 Gordon D. “Gordy” Moen Age 80, of Marshfield, passed away peacefully on Friday, December 18, 2020 at Marshfield Medical Center. In keeping with Gordy’s wishes, and when it is safe to do so, his family is planning to have a gathering and celebration of Gordy’s life in the Spring of 2021. A date and time will be posted as it becomes available. Gordy was born on December 22, 1939 in Marshfield, the son of Thurston and Lila (Larson) Moen and attended Spencer High School. On August 15, 1959, he married his best friend, Shirlee Weis, in Spencer. Gordy was employed at Edelweis Cheese in Marshfield, where he completed a 30-year career as a cheesemaker. He started out as a milk hauler, enduring the cold winters and getting stuck in farmers’ snow-drifted driveways and ended his career as Field Man, where it was his job to bring in patrons for the factory. During this time, he also proudly served as secretary/treasurer of the Wisconsin Cheesemakers’ Association. He was also a member of the Marshfield Elks Club. His hobbies included tending to his lawn and flower beds, which were always manicured and meticulously cared for. And he had a special interest in the weather. For many years he was an official weather reporter for Channel 12 Rhinelander. He had a remarkable memory for weather statistics. His greatest passion was being a committed and supportive Wisconsin Badgers football fan. He held season tickets for nearly 50 years and attended every home game during that time. He was especially proud of the fact that in 2015 he was recognized by the team as Fan of the Year for his outstanding attendance record. He was visited at his home by representatives from the Badger football team, including Ron Dayne, and was presented with the award on the field at Camp Randall Stadium. Gordy had so many friends and seemed to know everybody. He especially looked forward to the weekly Wednesday morning coffee gatherings with his buddies. His experiences at Edelweis gave him the opportunity to travel the countryside and to get to know so many people, especially those in the farming community. It seemed that wherever he and Shirlee went, whether it was to the mall, or to any of the numerous church pancake suppers that they enjoyed so much, they would run into people that knew Gordy. Gordy was always the optimist and rarely had an unkind word about anybody. He was kind, generous and respected by all; always willing to help those in need. There are many friends and neighbors who are going to miss his help with mowing their lawns and shoveling their driveways. Those who will cherish his memory include his loving wife, Shirlee; his daughter, Roxanne (Jeff) Baker of Marshfield; two sisters: Kathy Vruwink of Wisconsin Rapids and Evelyn Kuehl of Stevens Point. He is further survived by nieces, nephews, friends and fellow Badger fans, along with his feline companion, “Goober”, and other kittens who found refuge in Gordy’s yard. He loved them all. He was preceded in death by his parents; his brothers: Adolph Singstock, Virgil Moen, Sanford Moen and Arlan Moen; and sisters: Jeanette Weber and Pearl Eckes. If desired, the family is accepting memorials in Gordon’s name for a charity to be determined. His arrangements are under the care of Life Tributes Funeral Home-Spencer. Please visit www.lifetributesfuneralhome.com to share thoughts and condolences.