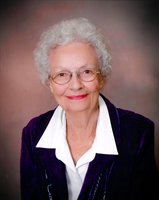 Betty M. Breheim Age 84, of Marshfield, passed away on Saturday, February 13, 2021 at Marshfield Care Center under the care of St. Croix Hospice. Funeral Services will be held privately at the funeral home with Rev. Chris Schwanz officiating. She will be laid to rest in West Spencer Cemetery in the Town of Sherman following the services. Betty was born on June 18, 1936 in Marshfield, the daughter of William and Esther (Rohloff) Schultz. On August 18, 1954, she was united in marriage to Albert “DuWayne” Breheim at St. Matthew’s Lutheran Church in Marshfield. Together, they raised three daughters. She was a member of Trinity Lutheran Church in Spencer. Her hobbies include tending to her flower gardens and using great skill crocheting and doing embroidery. She also had a great love for cooking, and many remember her as a great cook. Betty is lovingly survived by her children: Julia (Glen) Parks of Marshfield, Jacqueline (Arnie) Dieringer of Spencer and Janalee (Dave) Murphy of Chili; her 10 grandchildren; her 14 great-grandchildren and her sister, Grace Maines of Marshfield. She is further survived by her favorite rat terriers, Snoopy and Brownie along with many other relatives and friends. She was preceded in death by her husband, Albert “DuWayne”; her parents, William and Esther and her grandson, Dayton Murphy. If desired, memorials are being accepted in Betty’s name to the family for a charity to be determined later. Betty’s arrangements are under the care of Life Tributes Funeral Home-Spencer. Please visit www.lifetributesfuneralhome.com to share thoughts and condolences.