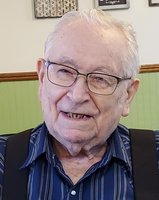 Age 87, of Stratford, passed away on Monday, May 17, 2021 at Marshfield Medical Center surrounded by his loving family.

Memorial Services will be held at 11 AM on Tuesday, May 25, 2021 at St. Andrew’s Catholic Church in Rozellville with Rev. Sengole Vethanayagam officiating. Full military honors will be conducted by Stratford VFW Post 6352 following the service. Family and friends are invited to gather at the church on Tuesday from 9 AM until time of service. The honor of pallbearer belongs to his grandsons: Jeremy, Christopher, Jon, Josh, Dustin and Lane.

Clem was born on August 1, 1933 in the Town of Johnson, the son of Faithful and Magdalena (Gaiser) Hargraves. He graduated from Athens High School. On October 17, 1953, he was united in marriage to Joan Schug. Following his service in the United States Army from February 1956 until January 1958, he moved to Marshfield, WI. He was self-employed at Pure Gas Station/Baltus Co., then worked at Weyerhaeuser and lastly worked for Stratford Homes as an electrician before then retiring.

Clem loved the International brand tractor and owned one or more of them throughout his life. He was an avid deer hunter who loved being outdoors with his son and family. In his later years, he enjoyed wordsearch puzzles, pressing his luck with scratch-off lottery tickets or taking a ride on his 3-wheel bike. When they could, he and Joan enjoyed a morning out for breakfast and conversation with friends at the Wild Steer Diner in Stratford or Melody Gardens in Marshfield.

Clem was preceded in death by his parents; his four brothers, Vernon, George, Marvin and Robert and his three sisters, Agnes, Wilma and Magdalena.