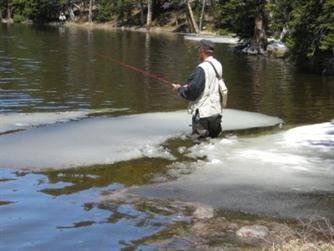 Richard M. “Rick” Engevold Age 58, of Marshfield, formerly of Spencer, died Wednesday, April 4, 2012 under the care of Ministry Home Care Hospice at the House of The Dove in Marshfield. His memorial service will be at 1PM on Saturday, April 7, 2012 at Life Tributes Funeral Home in Spencer. The Rev. Mark Krueger will preside. Committal services will take place privately at a later date. Relatives, friends and co-workers are invited to gather at the funeral home in Spencer on Saturday from 11AM until time of services to share thoughts and memories with Rick’s family. Rick was born June 21, 1953 in Marshfield, the son of Marvin and Eleanore (Caitlin) Engevold. He attended Loyal High School. He resided in Spencer for 40 years later moving to Marshfield. Rick married the former Sharon Redig. They later divorced. Rick was employed at Land O Lakes in Spencer where he created some great friendships with his co-workers. His hobbies included fishing and hunting. Survivors include his three sons: Paul (Amy) Engevold of Cedar Grove; Matt (his partner Melissa) Engevold of Fond du lac; Chad (Devon) Engevold of Keaau, HI; A “adopted”son”, his nephew Matt “Bozo” Redig of Keaau, HI; 10 siblings: Karen Perry of Marshfield; Larry (Lynette) Engevold of Neillsville; James Engevold of Marshfield; Mary Walde of Greenwood; Dennis (Denise) Engevold of Spencer; Pamela Mondloch of Marshfield; Pat (Linda) Engevold of Spencer; Jeffery Engevold of Platteville; Randy (Trish) Engevold of Monroe, GA and Kevin (Anna) Engevold of Granton. Rick is further survived by many nieces, nephews, other relatives and many friends. Rick was preceded in death by his parents, and a daughter Barbie. Rick’s sons would like to extend their heartfelt gratitude to Dr. Claessons, Rick’s nurses Cheryl and Jennifer and all those who provided gentle and compassionate care for their father. Their commitment to his care was appreciated and will not be forgotten.
To plant a tree in memory of Richard Engevold, please visit Tribute Store
Plant a Tree
Print