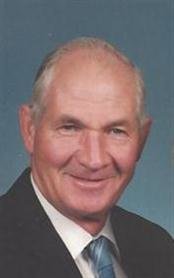 Anthony J. “Tony” Stockheimer Age 80, of Mosinee, passed away Sunday, April 22, 2012 with his wife and family at his side and under the care of AseraCare Hospice at Golden Living Center-Three Oaks, Marshfield. A Mass of Christian Burial will be celebrated at 11AM on Wednesday, April 25, 2012 at St. Andrew’s Catholic Church, Rozellville. The Rev. Eric Berns, Pastor, will officiate. Committal services will follow in the parish cemetery. Friends may call on Tuesday, April 24, 2012 from 4PM until 8PM at Life Tributes Funeral Home, Spencer and on Wednesday at the church from 10AM until time of service. The Knights of Columbus Council 1799 of Marshfield will conduct a rosary service at 7PM followed by a parish prayer service at 7:30PM both Tuesday evening at the funeral home. Tony was born April 8, 1932 in the town of Day, Marathon County, son of the late Benno and Mary (Wittman) Stockheimer. He attended parochial school at St. Andrew’s Catholic School later graduating from Marshfield High School. Tony then attended two years at Marshfield Technical College. On May 24, 1955 Tony married the former Violet “Vi” Knetter at Sacred Heart Catholic Church in the town of Cassel. From 1955 through 1980 Tony and Vi owned and operated a dairy farm. In 1980 they moved to Marshfield where they resided until 1998 when Tony and Vi moved to their present home in Mosinee. His memberships included St. Andrew’s Catholic Church in Rozellville, a member of the parish council and Holy Name Society, a Fouth Degree Member of the Knights of Columbus Council 1799, Marshfield, and a former member of the Town of McMillan Vol. Fire Department. Tony was a avid outdoorsman who loved hunting, fishing, yard work and gardening. He loved watching football, listening to his favorite polkas and square dancing. Survivors include his loving wife Vi of Mosinee, two sons Michael (Joan) Stockheimer of Marshfield, Fran (Bea) Stockheimer of Stratford and a daughter Bonny (Gary) Aschenbrenner of Stratford, four granddaughters: Jenny (Erik) Krohn of Oshkosh, Heidi (Brad) Mrozek of Stevens Point, Kari Stockheimer of Milwaukee, Sara Aschenbrenner of Plover; three grandsons: Craig Aschenbrenner of Stratford, Justin Stockheimer of Stratford, Adam (Emily) Aschenbrenner of Marshfield. Tony is further survived by two sisters: Agnes (Mark) Kaiser and Rose (Don) Wenzel both of Stratford; and two sisters-in-law: Joan Stockheimer of Stratford and Helen Stockheimer of Marshfield. Tony was preceded in death by his parents; one sister Anna Marie Kress and four brothers: Norbert, Edward, Joseph and Ray Stockheimer. A personal note from his wife Vi: “I was so very blessed (The Lord is Good). He gave me the strength to care for and love Tony and also gave Tony his wish to live at home. I am so happy we had 57 wonderful years together”.
To plant a tree in memory of Anthony Stockheimer, please visit Tribute Store
Plant a Tree
Print