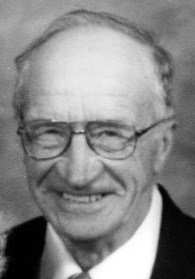 Norman H. Wiersig 90, of Colby, formerly of Spencer and Tomahawk, died Saturday, May 19, 2012 at the Colonial Center in Colby. Funeral services will be held at 4PM on Tuesday, May 22, 2012 at St. Peter Lutheran Church in Dorchester. The Rev. Jerome Freimuth will officiate. Burial will follow in Colby Memorial Cemetery. Visitation will be from 2pm until time of services on Tuesday at the church in Dorchester. Life Tributes Funeral Home and Cremation Service of Spencer is assisting Norman's family Norman was born December 03, 1921 in the town of Hull, son of the late Rudolph and Lena (Weber) Wiersig. He married the former Verna Suiter on August 29, 1964 at Immanuel Lutheran Church in Hewitt, WI. Norman operated the Wiersig family dairy farm in the town of Hull near Cherokee from the time he was a youth. He purchased his own farm in Granton in 1966 and farmed until his arthritis became too severe to continue. He was subsequently hired as a laborer at Pathfinder Homes in Spencer. When the Pathfinder plant closed, he started his own business, selling liquid fertilizer and field corn. He loved the land, fields and crops, monitoring the weather and planting season diligently even up to very recently. He retired in 1987 but kept busy transporting Amish folk to their appointments in kind. He had many fond Amish farm friends. Grandpa loved to watch his granddaughters play softball. He enjoyed watching the Milwaukee Brewers on TV to pass the time. He kept huge vegetable gardens and raised his own fruits for the family on his hobby farm in Spencer. He and Verna enjoyed many county fairs and tractor pulls in the area upon his retirement. Immediate survivors include his loving wife, Verna, Colby; two daughters: Judy (Mark) Bye; Schofield, Beverly Wiersig, Spencer, and two granddaughters: Amanda Charles, Tomahawk, and Melissa Charles, Nashville, TN. He is further survived by his sister, Marena Wiersig of Owen. Norman is preceded in death by his parents, brother Arnold, brother Herbert, brother Eldor, sister Renata Rashka, and sister Lucinda Lange.
To plant a tree in memory of Norman Wiersig, please visit Tribute Store
Plant a Tree
Print