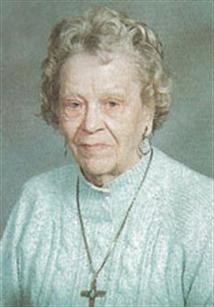 Ellen L. Tisler, age 90, of Colby, passed away in the evening on Thursday, December 22, 2011 in the Palliative Care Unit at Saint Joseph’s Hospital in Marshfield. Her funeral service will take place at 11:30 AM on Thursday, December 29, 2011 at Zion Lutheran Church in Colby. The Rev. Mark Neumann will preside. Burial will take place in Trinity Lutheran Cemetery in the town of Brighton in Marathon County. Friends may call on Thursday at the church in Colby from 9:30AM until time of services. Ellen's nieces and nephews will serve as pallbearers. They include Kenneth, Bill, Brenda, Ashley, Justin and Tonya Monness. Ellen was born May 4, 1921 in Wheeling, IL, daughter of the late Edward and Clara (Ruback) Moeller. She attended Wheeling Public Schools then later Arlington High School. She worked at various jobs until her marriage to Joseph Duda on May 23, 1966. Joe passed away on April 20, 1990. Ellen later married Henry Tisler on October 18, 1997. Henry preceded her in death on February 21, 2004. Ellen owned and operated the Kountry Kitchen, a famous restaurant in Marseille, IL. She was active in the restaurant business most of her life. Her hobbies included sewing and baking and cooking delicious meals. In April of 2006, Ellen moved from Illinois to Colby and has resided here since. She was a member of Zion Lutheran Church in Colby. Survivors include a stepdaughter, Roberta (Richard) Ferry of Douglasville, PA; a stepson, Joseph (Eileen) Duda of Conshohocken, PA and one sister, Lois Monness of Colby. Ellen is further survived by step-grandchildren, step-great grandchildren, nieces and nephews along with many other relatives and friends. Ellen was preceded in death by her parents; her two husbands: Joseph Duda and Henry Tisler; one brother, Clarence and one sister, LaVerne. Memorials in Ellen’s name are being accepted to Zion Lutheran Church in Colby.
To plant a tree in memory of Ellen Tisler, please visit Tribute Store
Plant a Tree
Print