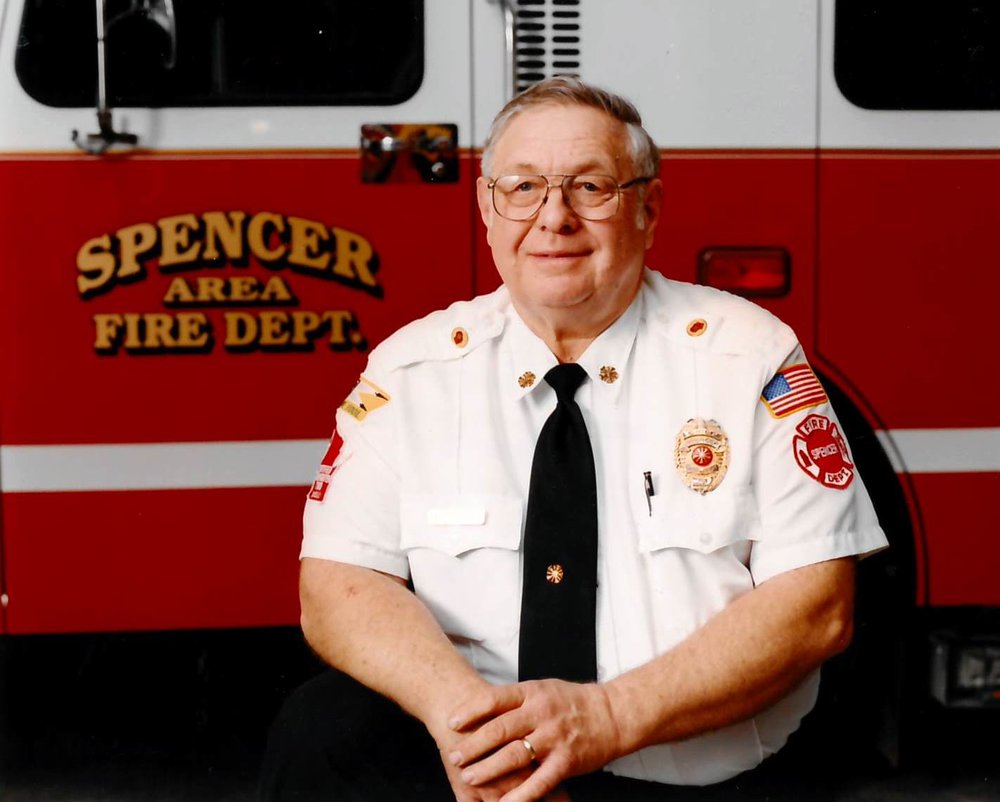 Obituary of Roger B Bymers

Age 78, of Spencer, passed away peacefully on Monday evening the 28th of January 2019 while in Palliative Care at Marshfield Medical Center.

A memorial service to celebrate Roger’s life will take place at 12noon on Saturday, February 2, 2019 at Saint John’s Lutheran Church in Spencer with Pastor Donald Bruce officiating. Committal services will follow in West Spencer Cemetery Township of Sherman with full military honors conducted by The Loyal American Legion Post 175.  Family and friends are invited to gather on Saturday at Saint John’s Lutheran Church from 9AM until time of services. The honor of pallbearer belongs to his grandsons: Payton Bymers, Steven Reckner, Todd Harris Jr., Alek Foss and Tyler Atkinson.

Roger was born November 23, 1940 in Spencer, the son of Paul and Ethel (Vanderhoof) Bymers.  He graduated from Spencer High School in May 1959; graduated from Army mechanic’s school Fort Sill, OK in April 1960; and attended many schools studying automotive repair and service station management. He was united in marriage to Mary Ann Rose on April 9, 1961 in Menomonee, MI.  Roger faithfully served his country beginning in October 1961 until his honorable discharge from the United Sates Army National Guard in the 32nd Infantry Division and during the Berlin Crisis.  Roger worked at the Spencer Farmers Co-op for 28 years and the former Jensen Motors in Spencer as a mechanic always willing to help you out with a car engine problem, fixing a tire or helping you any way he could. He also provided years of service to the Spencer and surrounding communities through his home business—Roger’s Tire and Repair.

He was a longtime member of Trinity Lutheran Church in Spencer, a former Spencer Village trustee/board member, was a founding member of the Spencer Swap Stompers Snowmobiling Club, was a mechanic for a stockcar team and was probably best known in Spencer and surrounding communities for his 48 dedicated years to the Spencer Area Fire Department; which he joined in 1964.  Over his career Roger had held the rank of firefighter, captain, assistant chief and held the position of fire chief from 1996-2011.  Roger along with others from the community were instrumental in operating the Spencer Fire Department Garage Sale, a fundraiser for the fire department but also a resource for those families or individuals who lost everything in house fires.  Roger would say “just come in and take what you need”.   Roger along with many others selflessly gave many hours of their time to help others. As a fireman, Roger has also worked with the Spencer Public School system to teach fire safety education and ensure the safety of all children, parents, teachers, other school employees and general public.

Roger was also founder and president of the Spencer Retired Firefighters Breakfast Club that met every month to have breakfast and share stories. He was a member of the Spencer Historical Society and knew countless facts about the village.  Roger was awarded with the honor of being “Spencer Citizen of the Year 2004”.

His hobbies included camping with his family, fishing, being a stand-in for Santa Claus because Santa could not always be everywhere all the time, fixing a tire for you or just maybe sitting down to talk for a while.

He was preceded in death by his parents and son-in-law Bill Zuk.

In lieu of flowers, the family is accepting memorials in Roger’s name to be given to The Spencer Area Fire Department.

His arrangements are under the care of Life Tributes Funeral Home-Spencer.  Visit www.lifetributesfuneralhome.com to share thoughts and condolences.

Share Your Memory of
Roger
Upload Your Memory View All Memories
Be the first to upload a memory!
Share A Memory
Send Flowers