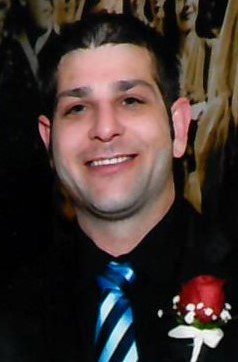 Age 36, of Dorchester, passed away unexpectedly on Tuesday, October 15, 2019 at his residence.

A funeral service will be held at 12noon on Tuesday, October 22, 2019 at Saint Peter Lutheran Church in Dorchester with Rev. Shawn Andersen officiating. Family and friends are invited to gather on Tuesday at the church from 9AM until time of services. Committal services will be held privately at a later time. The honor of pallbearer belongs to Ky DeGroot, Vince Rau, Nathan Bruce, AJ Behnke, Gene Henke, Brian Dombroski, Tim Schwecke and Kora Reynolds.

Jeremy was born November 12, 1982 in Marshfield, the son of David and Sandy (Geiger) Behnke. He was a Colby High School graduate later attending some technical school classes. He had worked for Four-Star Marketing as a processing engineer. On April 18, 2017, he was united in marriage to Danielle Moberg. They later divorced.

Jeremy enjoyed camping, fishing, traveling and spending time in Mexico and Colorado or any place with sandy beaches and water. Other interests included being outdoors on his snowboard, playing guitar and golfing and was proud to be one of the Milwaukee Brewers “Greatest Fans”.

Survivors include his parents David and Sandra Behnke of Dorchester; his brother Matt (Jonelle) Behnke of Wausau; his niece Lily Behnke of Wausau and his maternal grandmother Geraldine Geiger of Dorchester. Jeremy is further survived by his English Bulldog Penny, his chickens Harriet and Becky and his cat Snooches along with many aunts & uncles, cousins and friends who loved him.

He was preceded in death by his maternal grandfather Norbert Geiger and his paternal grandparents Dale and Irene Behnke.

If desired, the family is accepting memorials in Jeremy’s name for a charity to be determined.

Share Your Memory of
Jeremy
Upload Your Memory View All Memories
Be the first to upload a memory!
Share A Memory
Plant a Tree