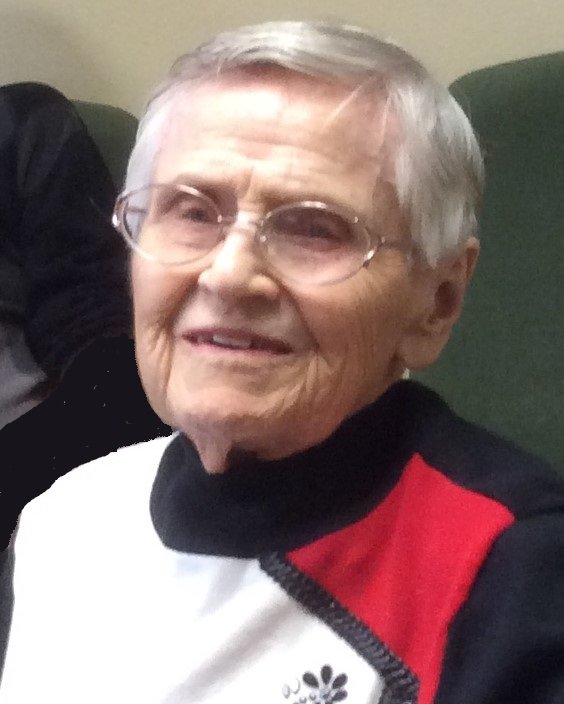 Please share a memory of Hildred to include in a keepsake book for family and friends.
View Tribute Book
Hildred I. “Hilly” Weimert Marshfield – passed away in the early morning hours of Saturday, August 1, 2020 at Three Oaks Health Services in Marshfield at the age of 97. To honor Hildred’s wishes, a private service will be held with her family and she will be laid to rest in St. Paul’s Catholic Cemetery in Bloomer, WI. Hilly was born on April 28, 1923 in Arlington, South Dakota, the daughter of Ross and Lauretta (Landmesser) Okland. She was united in marriage to Louis Weimert on November 6, 1943 in Mankato, MN. They later divorced. She worked as a bookkeeper for Pepsi Bottling Company after attending Mankato State Commercial College. Her family recalls the story told by Hildred of returning to college to find that all but two men in her class had enlisted in the Armed Services at the start of World War II. She gave of her time and talents as President of the local Deanery in Chippewa County, a Cub Scouts leader and was a member of the Marshfield Library Genealogy Department for more than seven years and worked as a licensed realtor in Marshfield helping families buy and sell property. Hilly enjoyed traveling to South Dakota, reading a good book, knitting and playing bridge. She also liked to spend time at the Cottage on Long Lake in New Auburn, WI. She was proud to have earned her pilots license and loved taking to the skies and taking flight. Those who will cherish her memory include her children, John Weimert of Chippewa Falls, Patricia Ann (Dale) Kopf of Marshfield and David (Linda) Weimert of Madison; 14 grandchildren; 23 great grandchildren and her daughters-in-law, Ronny Reynolds-Beil of Janesville and Joan Lubs-Weimert of Chippewa Falls along with many other relatives and friends. Hilly was preceded in death by her parents, her husband, Louis, her sons, Dr. Michael Weimert and Daniel Weimert If desired, memorials are being accepted in Hildred’s name to be directed to Marshfield Library Genealogy Project or to just purchase and read a favorite book in memory of Hilly. The family would like to thank Three Oaks Health Services of Marshfield for all the care that they gave to Hilly in her last years. Hilly’s arrangements are under the care of Life Tributes Funeral Home-Spencer. Please visit www.lifetributesfuneralhome.com to share thoughts and condolences.
To plant a beautiful memorial tree in memory of Hildred Weimert, please visit our Tree Store

Share Your Memory of
Hildred
Upload Your Memory View All Memories
Be the first to upload a memory!
Share A Memory
Plant a Tree