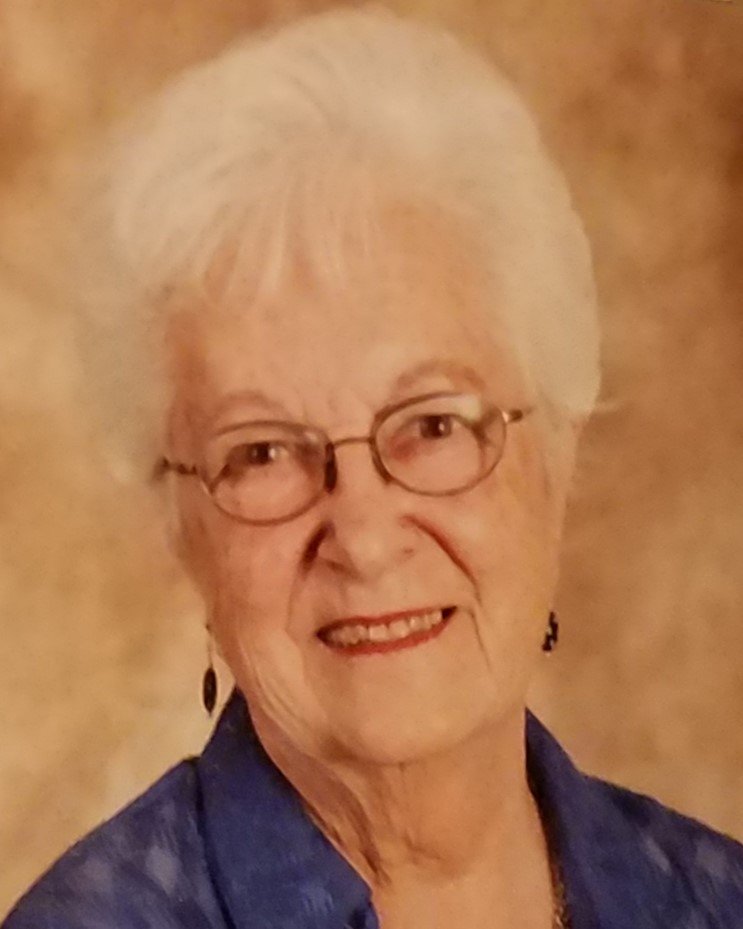 Please share a memory of Faye to include in a keepsake book for family and friends.
View Tribute Book
Faye A. Amo Age 91, of Dorchester, died on Friday, November 27, 2020 as the result of a motor vehicle accident. A Funeral Service will be held at 11 AM on Friday, December 4, 2020 at St. Peter Evangelical Lutheran Church in Dorchester with Rev. Shawn W. Andersen officiating. She will be laid to rest following the service at Lakeview Cemetery in Rib Lake. Family and friends are invited to gather at the church on Friday from 9 AM until time of service. The honor of pallbearer belongs to her nieces and nephews: Gary Schwoch, Klark Schwoch, Mark Kovatch, Melissa Lueders, Nick Forrett, Eric Kovatch. Honorary pallbearers will be Greg Kovatch, Steve Schwoch, Jayson Galler and Jayna Bergdorf. Faye was born on August 15, 1929 in Milwaukee; the daughter of Edward and Ida (Gilge) Kelnhofer. She graduated valedictorian at Rib Lake High School, Class of 1947. She then went on to earn a diploma from the nursing program at St. Joseph’s Hospital in Marshfield and worked as a register nurse for many years. She currently worked at Homeplace of Dorchester cooking meals for the residents. She also volunteered her time for hospice and as a volunteer grandma at Dorchester and Colby Elementary School for more than 20 years. She was united in marriage to Theodore “Ted” Schwoch in Rib Lake. Together, they had three children. They later divorced. She was later united in marriage to James “Jim” Amo at St. Peter Evangelical Lutheran Church in Dorchester. Sadly, Jim passed away January 31, 1998. Faye was a member of St. Peter Evangelical Lutheran Church in Dorchester. She also played the organ and sang in the choir at church. She was also a member of many other groups such as the Red Hats, the Showcase Players Theater Group, the Lions Club and many others. She was always on the move and always busy. She loved to work in the garden and cooking and baking in the kitchen. She loved to bake all kinds of Christmas cookies around the holidays. She was gifted with skillful hands to crochet scarves and baby hats for the newborn babies at the hospital. She was also an avid cat lover. Those that will lovingly cherish her memory are her children, Yvonne (Bruce) Pawlowicz and their daughters, Angela Forrett and her children, Landon, Teegan and Brynlee Forrett and daughter, Ashley Pawlowicz, all of Dorchester; Wenda Schwoch and her husband, Larry Schlais of Minneapolis, MN and Kurt (Kathy) Schwoch of Dorchester and her four step-children, Sherry Fox of Appleton, Marsha Johnson of Appleton, Jim Amo of Appleton and Jamie “BJ” Amo of Covington, GA. She is further survived by her seven step-grandchildren, Aaron, Elliot, Austin, Elizabeth “Betsy”, Cambria, Cassy and McKenna; her six step great-grandchildren, Zack, Shea, Braydon, Emma, Aubrey and McKinleigh and her nieces, nephews, other relatives and friends. Faye is preceded in death by both husbands, Ted Schwoch and Jim Amo; her parents, Edward and Ida Kelnhofer and two brothers in infancy, Kenneth George and George Edward. In lieu of flowers, memorials in Faye’s name are being accepted by the family to go to a charity to be determined. Faye’s arrangements are under the care of Life Tributes Funeral Home-Spencer. Please visit www.lifetributesfuneralhome.com to share thoughts and condolences.
To send flowers to the family or plant a tree in memory of Faye Amo, please visit Tribute Store
Friday
4
December

Share Your Memory of
Faye
Upload Your Memory View All Memories
Be the first to upload a memory!
Share A Memory
Send Flowers
Plant a Tree